Diesel is now apart of the future

If you needed more evidence that the world of power systems is changing (and you shouldn’t), the Deutz exhibit at ConExpo-Con/Agg in March underscores that point rather strongly.

One of world’s oldest manufacturers of diesel engines, Deutz had eight displays, only two of which were new diesel engines. The diesels were the company’s TCD 2.2 and the newly introduced model TCD 13.5. There was also a remanufactured Deutz Xchange diesel.

The biggest part of the Deutz display was an all-electric model G5-18A telescopic handler concept, developed in collaboration with JLG. The G5-18A has a 360V drive system that uses a split drive comprising two, 40 kW electric motors – one for driving and one for the hydraulics in the telescopic arm. The battery is from the EDeutz modular toolbox and offers 42 kWh of capacity. The 6.6 kW charging system can restore the battery charge to 80 percent within four hours. 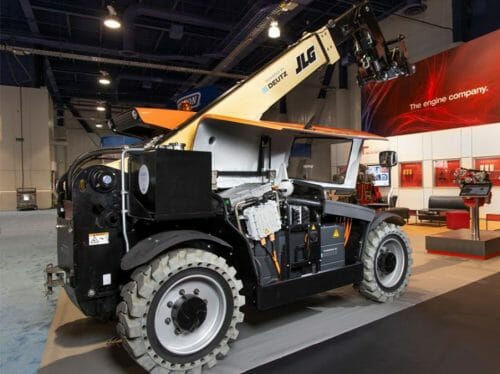 Diesel is now apart of the future

Our latest offer from Kubota